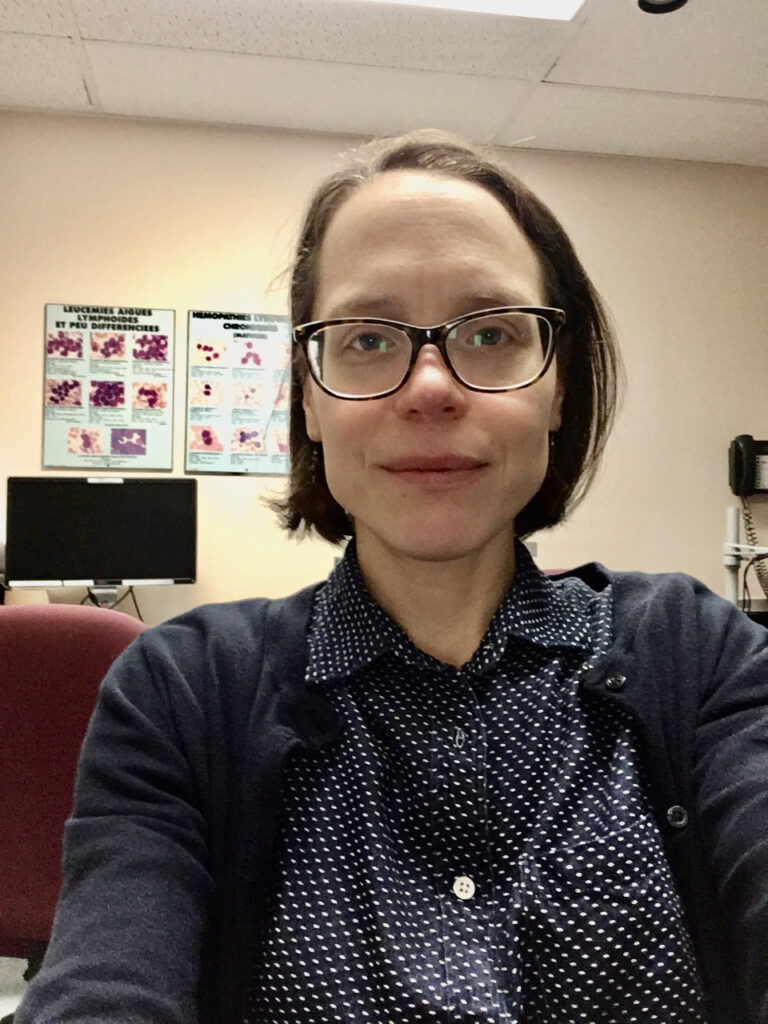 The QCC team is delighted to introduce Dr. Natasha Szuber, a hematologist-oncologist at Hôpital Maisonneuve-Rosemont (HMR) and clinical researcher at the HMR’s research centre. Dr. Szuber is fascinated by the physiology of blood and has a rich and varied career path to her credit.

After completing her bachelor’s degree in physiology at McGill University, she realized that blood was her main area of interest. Dr. Premysl Ponka, an internationally renowned expert in iron metabolism and beta-thalassemia, was her first mentor during her master’s studies. To gain greater insight into the human element that had been missing from her education, she completed her education at Université de Montréal. She then did her residency in hematology and medical oncology at Hôpital Maisonneuve-Rosemont, where she met Dr. Lambert Busque, hematologist.

Dr. Busque, Dr. Szuber’s second great mentor, is a hematologist with a keen interest in myeloproliferative neoplasms (MPNs). For Dr. Szuber, working with him on promising projects in the field of NPMs was a wonderful opportunity.

The third major step in Dr. Szuber’s career path was her Fellowship in hematology (myeloid diseases) at Mayo Clinic in Rochester, Minnesota, working alongside a world expert in MPNs, Dr. Ayalew Tefferi. That experience had a definite impact on Dr. Szuber’s practice and took it in a new direction.

In 2021, Dr. Szuber received a FRQS Clinical Research Scholars — Junior 1 scholarship, enabling her to devote more time to research. She is one of the 20 or so researchers studying MPNs in Québec and a member of the CML-MPN Quebec Research Group, a non-profit founded by Dr. Busque in 2011.

The CML-MPN’s Research Group’s mission is to:

Although the prognosis is fairly good (MPNs are considered chronic illnesses), patients must deal with the stress of living with cancer from which they will never recover.

In addition to her research on blood, another thing that fascinates Dr. Szuber is the human factor in patient management. “It’s extremely important. It’s fascinating because with MPNs more than other types of diseases, we’re starting to have a considerable body of literature on quality of life and the burden the disease puts on patients. In my view, that’s really important for this type of disease, maybe even more than for other types of diseases, because it’s a lifelong burden that patients will have to bear. And patients aren’t shy to tell us so.”

A support group for MPN patients was created in Quebec in 2018. Although patients may appear to be in perfect physical health, they still require attentive psychological care from their attending physicians. “You can’t go into this field of medicine if you’re not willing to really be there for your patients,” adds Dr. Szuber.

Knowing how to distinguish MPNs from other diseases makes an enormous difference in patient care.

Sometimes a patient may present with a condition mimicking MPN and causing an overabundance of white blood cells, so careful analysis is required to know if it’s a genuine case of MPN. “I have always been interested in diseases that involve a proliferation of white blood cells. MPNs are perfect for me: they’re right on the borderline, somewhere between malignant diseases and other, similar diseases. We have had some very sophisticated molecular tests since the early 2000s. We have figured out the disease’s pathophysiology. There are some molecular markers, and we do diagnostic tests. Most of the time they work well and efficiently, but we always have a small group of patients without any molecular markers: the classic driver mutations.”

For that reason, it’s important to continue funding research in this field, even though only one grant is awarded for every five applications filed. Keep in mind that MPNs are chronic diseases, and so patients will have to deal with them all their lives. They put a huge burden on their shoulders as well as the health system. The thing that Dr. Szuber really likes about MPN research is that there’s a sort of vacuum that can and has to be filled. The fact that few grants are awarded in this area is another encouragement. There is still an enormous amount of research to be done, and that can be an advantage for interested researchers. There’s still a lot to be learned, according to Dr. Szuber: “If it can benefit our patients—and as clinical researchers, coming up with a concrete way to improve our patients’ lives is, of course, our ultimate goal—that’s fantastic!”

Polycythemia vera (PV), which is an MPN, affects about 50 out of every 100,000 people, according to information from the U.S. There are therefore about 5,000 cases of PV in Quebec. Although it’s fairly rare, the incidence of PV is increasing. It primarily affects individuals over 60 years of age but is being increasingly diagnosed among younger patients. However, the reason for the increase is still unknown, and there is a great deal of research to do on this point. The overall survival rate for this form of the disease ranges from 15 to 20 years.

It’s noteworthy that few clinical studies on MPNs are performed in Quebec. According to Dr. Szuber, “there’s lots of room for MPN therapeutics. A number of treatments have been around for a long time. The picture hasn’t changed much in the last 30 years, except for JAK2 inhibitors, which came out more recently. But other than that, there are lots of opportunities to explore on the therapeutic front. There’s room for taking treatment in a whole new direction and broadening our approach.” That is particularly true for myelofibrosis, the most serious form of MPN. It comes with a prognosis that is decidedly less positive, at about five years of survival.

“Myelofibrosis is the most serious form because that’s where there’s the most room for improving survival rates and where our therapeutic arsenal is rather limited. However, I should point out that the statistics are based on patients in their 60s. Younger people are living longer.”

Even though MPN research projects are very specialized, the possibilities for cooperation with the QCC are nearly infinite. Although Dr. Szuber has conducted a number of epidemiological studies, she would like to partner with other QCC researchers to explore translational research on MPNs in greater depth.